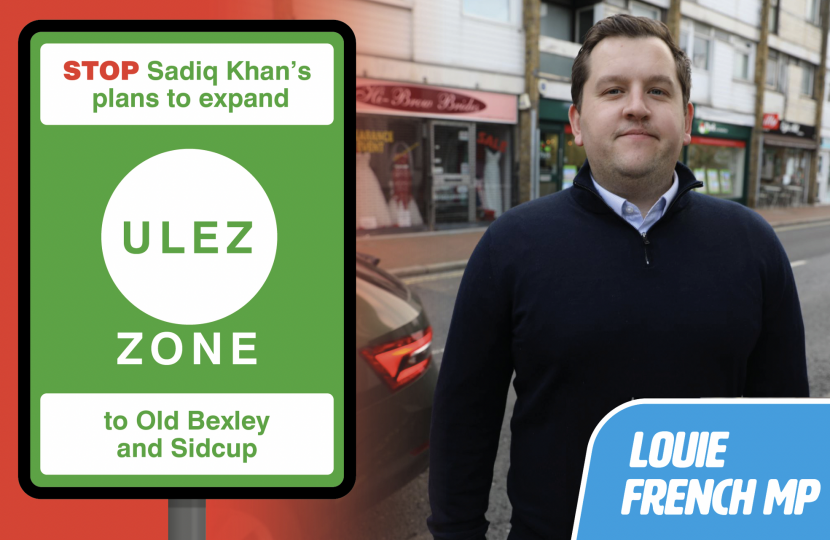 Sadiq Khan plans to expand the Ultra Low Emission Zone (ULEZ) to Old Bexley and Sidcup from next year.

Under Khan’s latest plans for expansion, all of Greater London, including Bexley would fall into the ULEZ by the end of 2023.

For Old Bexley, Sidcup and Welling residents, this means paying £12.50 per day and £4,500 per year for driving within the constituency or anywhere in Greater London if you drive an older car with a penalty charge of £180 per time.

The Mayor of London has not only asked TfL to consult on expanding ULEZ to Greater London, but also to develop a proposal for future road user charges for delivery later this decade. This leads to the concern of once the cameras are in place, who's vehicles will be taxed next?

Whilst I completely believe action must be taken to tackle air pollution and I welcome the Government’s action on this, there is no clear evidence that the expanded ULEZ will improve air quality in outer London boroughs like Bexley. On the contrary, these plans are yet another attack on outer London areas like Bexley by the Mayor of London and a way for him to fill the black hole he has made in Transport for London’s finances, despite millions of taxpayers pounds in bailouts from central government and an 8.8% increase in his share of our council taxes.

If Sadiq Khan wanted to help tackle air pollution, investment should be made to support people with the transition to electric vehicles, including the installation of electric vehicle charging points. There should also be a review into the impact of his road closures on increasing traffic and potentially emissions across London.

Bexley and outer London boroughs do not have the same transport options and connectivity as Central London so it is extremely unfair the Mayor of London is proposing plans for expansion.

The proposals would hit local businesses, key workers and families in Bexley who cannot afford a new car. We are already receiving reports of local nurses at Queen Elizabeth Hospital being impacted by the latest ULEZ expansion

I will therefore stand up for my constituents and campaign to stop the Mayor of London's expansion plans, but I need your help by signing the petition below to show Sadiq Khan the level of opposition against his £4,500 each year tax raid on local drivers. I will also share the official TfL consultation once launched.

Louie French has launched his petition to stop the Mayor of London’s plans to expand the Ultra Low Emission Zone (ULEZ) to Old Bexley and Sidcup and all of Greater London from next year.