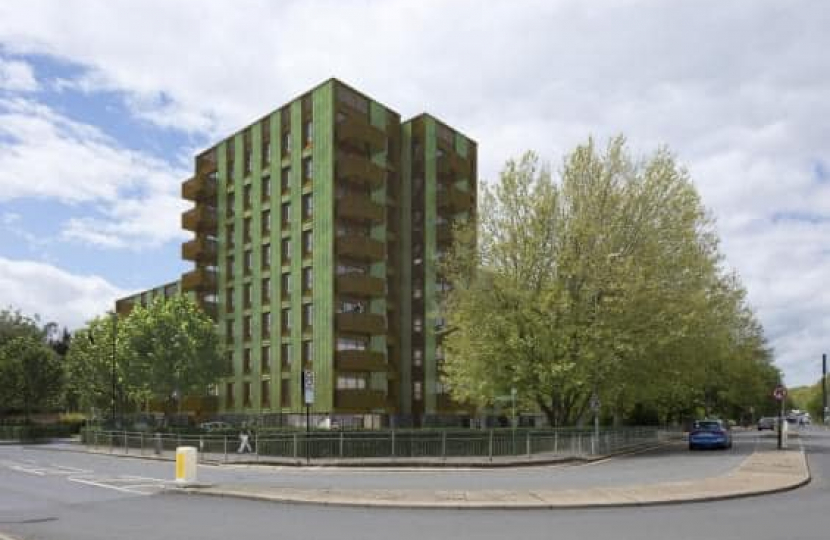 After months of delays, the Shepherds Leas development, being brought forward by Greenwich Council's own developer, close to Falconwood Station will be heard next Tuesday at Greenwich Council’s Planning Board. Any resident looking to speak must register before midnight on Sunday by emailing committeess@royalgreenwich.gov.uk

Greenwich Council officers appear from their report to have agreed with Louie and local residents that the building is inappropriate for this location in terms of height and scale, but it is now up to the Labour Councillors on the Board to listen to residents’ concerns next week.

In summary, the plans are 70 flats, only 3 parking spaces and one of the blocks will be 9 storeys high. 488 objections against (plus many more on a separate petition) and 6 in support. Louie believes that this development will have a negative impact on residents across the local areas of Blackfen, East Wickham, Falconwood and AveryHill/Eltham.

A copy of Louie's formal objection, which was sent to Greenwich Council in early March, is copied below.

“As outlined previously at your consultation events, I remain concerned by the scale of the proposed development and the likely impact this will have on both local residents and wildlife. Whilst I fully agree with the need to redevelop the site of Shepherd Leas, Falconwood after many years of neglect by Greenwich Council and the need for affordable local housing, I do not believe that these proposals are appropriate for the location.

I welcome that the proposed height of the building has been reduced from eleven to nine storeys, however, I still have concerns over the proposed height and design in relation to local wildlife and views. The site of the proposed redevelopment lies among ancient woodland including Oxleas Woods and Shepherdleas Wood which provides a valuable habitat to wildlife and is designated a Site of Special Scientific Interest. I am concerned over the impact of this height of the building on the local wildlife, in particular the disturbance to bats and birds and their habitat chains. The area also benefits from a well-loved and locally recognisable landscape and I am concerned a nine-storey development will impose on this. In my opinion, it is not in keeping with the local area at all.

In my opinion, the re-development plans also do not consider well enough the impact this development will have on parking (given the lack of onsite provision), the busy junction at Falconwood Station (a missed opportunity to work with Bexley Council to improve road safety in the area), and also the impact on local services given the large number of units proposed.

The general perception from Greenwich Council’s developer appears to be that because this site is close to a train station, the maximum number of units and zero parking should be the approach, rather than what is appropriate for Falconwood as an area overall.

I am also concerned by the apparent lack of consultation of Bexley residents, especially given most of the services that future residents will require are likely to fall outside the Royal Borough of Greenwich in areas such as Falconwood and Blackfen”.

Louie French has welcomed that there will be a new local style Post Office branch on Sidcup High Street following the main branch closure in 2019.